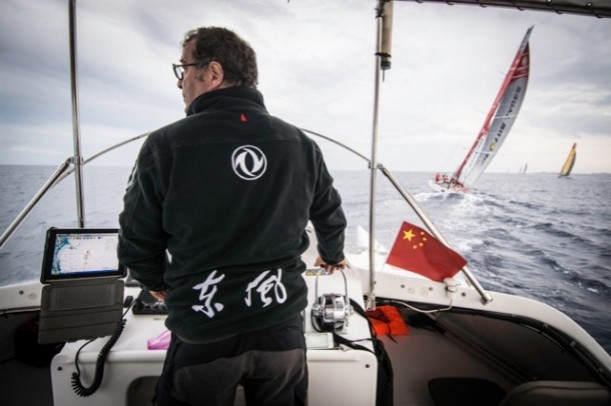 13th October 2014
The wind has just swung right, lightning is streaking across the sky and the rain is driving our faces into a wrinkled squint. In the eerie red light of the flying bridge Thierry mutters in his thick French accent, “it is over, we cannot do more than 12 knots in these condition. We are wasting our time now”
And then it was gone. The rain stopped, the wind shifted yet again and suddenly dropped. Race face descended across Thierry and the game was suddenly on again.
For the past 10 hours Thierry Peponnet, former sailing coach of Groupama and owner of the catamaran Tivicat, has been helping our three man media team chase down the Volvo Ocean Race fleet on day 1 of the race. Logistical issues kept us dockside for 2 hours after the start, but the purpose built Tivicat, a 60 foot power multi hull that doubles as a super stable camera platform, was more than a match in the light conditions after the start . An hour before sunset the fleet came into sight as they approached Cabo Palos on the southern coast of Spain, about 60 miles from Alicante.
The light conditions which had helped us in our chase continued and between the lack of colour in the stormy sky and subtle sea state, the picture in our mind was fading fast.
But like all good Operas, it’s never over till the sky goes dark, and just as we were squeezing the last ounce of shutter speed from our cameras everything changed. Even the crew of nearby Dongfeng looked around puzzled when they heard our trio of photographers whooping and cheering cause the sun had saved her best for last, lighting up the horizon over the Cabo Palos with a deep orange glow as a contrast to the dark grey sky.
With the workable light gone and the picture in the bag, Thierry asked our team if we still wanted to follow the fleet over-night as planned or call it a day. Poor Thierry quickly realized he had a pack of die-hard snappers, and unashamed Volvo Ocean Race fans, when his question was met with terse replies. Thierry was in for the long haul.
The exposed flying bridge of Tivicat stands a couple of solid meters above the lower deck, and the view over the playing field is nothing short of panoramic and the nights feature show that followed was phenomenal. By midnight the sky was streaked with rapid shards of lightning, illuminating the sea and sails of the yachts for an instant. The wind was building, the rain was coming in the right ear one moment and the left the next and all the time the red and green port and starboard mast lights of the VO65’s were dancing across the darkness in front of us.
And then, exactly as Thierry had worried the wind veered (swung from south to west or clockwise) increasing even more and driving the rain clean through our open cockpit into our faces as the mast lights faded away. Defeated, Thierry muttered in his strongest French expletive that I should discuss with the rest of the team giving up the chase as not even the Tivicat with it’s twin Volvo Pentas was up to holding station with a Volvo Ocean 65 thundering upwind.
When I returned to the bridge I may have neglected to mention to Thierry that the rest of the team was fast asleep and relayed a message to rather please do his best. Heck, I couldn’t let this perfect date end here.
The words had hardly left my lips when Thierry held up his hand and pointed out the wind had suddenly dropped. A quick glance of the AIS (Automated Identification System) showed that all the yachts had slowed to under 10 knots. The hunt was back on.
Throughout the night Thierry and his first mate George did an incredible job to predict where the fleet may head next and an hour before dawn we were locked onto Dongfeng’s stern close enough to read the red telemetry figures on the mast that is the helmsman’s bible at night.
An hour before sunrise the team was up waiting patiently for the sky to lighten enough to a start working again, and when it did it was nothing but the sweet sound of the camera’s shutters at full chat. That and the whistle of the wind as the VO65’s tore along at 12 knots upwind, just what the Tivicat ordered.
For the rest it’s time to let the pictures do the talking, while for the media team it’s a night we’ll never forget.


p.s. There is a downside to all this. My virtual boat is now grounded on the north coast of Africa in the Volvo Ocean Race game. - By Marc Bow